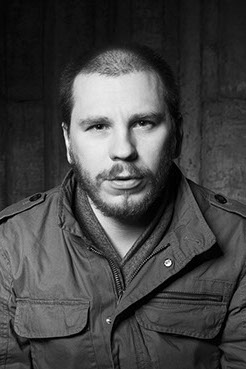 Born in 1982, Nikita Shalenny graduated from the Prydniprovska State Academy of Civil Engineering and Architecture, department of Architecture and worked as an architect and a lecturer at the Academy before beginning full time career as an artist in 2011. The same year he received the Public Choice Prize, Pinchuk Art Centre and in June, 2015 he was awarded the Winner of the Best Installation Prize, ArtVilnius ’15, Lithuania. In 2017 Shalenny entered the short list of Social Contract internternational contest by Izolyatsiya Foundation, Ukraine and was awarded the young artist of the year prizes by Faurschou Foundation and Khora Contemporary, Denmark.

Currently residing in Ukraine, Shalenny works with such media as painting, drawing, video, sculpture, photography and installation. Works of Shalenny can be found in collections of Mocak Museum of Contemporary Art, Krakow, Poland, Faurschou Foundation, Copenhagen, Denmark, and private collections in Europe and United Kingdom.