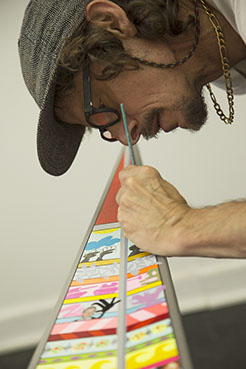 Erik Parker was born in 1968, Stuttgart, Germany, but later moved to San Antonio, Texas. He currently lives and works in New York. Parker attended the University of Texas at Austin before receiving a Master of Fine Arts from Purchase College in New York.

Erik Parker is known for his precisely painted and organized worlds of chaos that exist within his brightly coloured, intensely layered, highly saturated canvases, that riff on the traditional genres of portraiture and still-life. Parker draws his inspiration from diverse elements of American subculture – psychedelia, underground comic books, the Chicago Imagists, hip hop and heavy metal, as well as Picasso, Francis Bacon and Roy Lichtenstein.